10 Famous Landmarks in Scotland You Should Visit 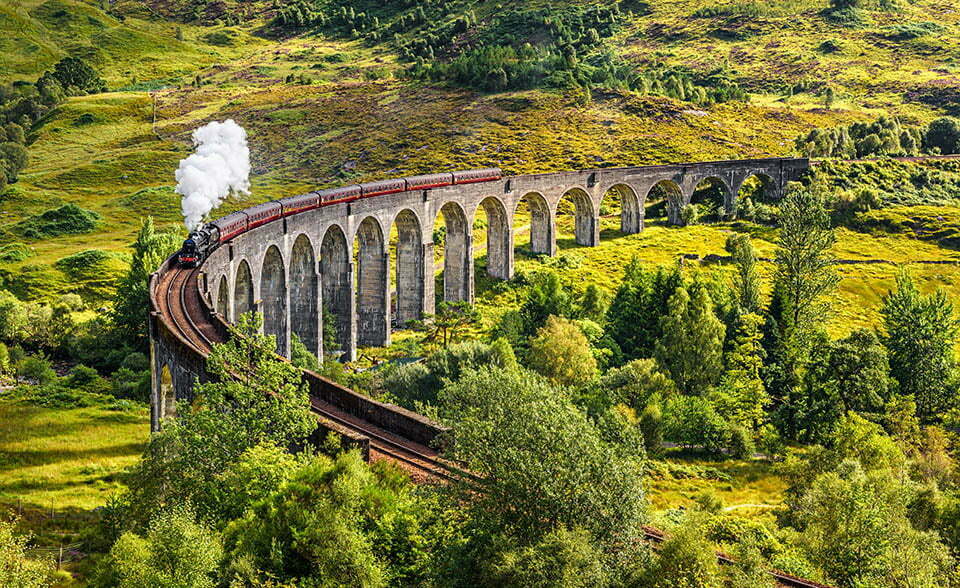 Look familiar? Fans of the massively successful Harry Potter franchise will recognise the magnificent Glenfinnan Viaduct from iconic scenes throughout the series. That’s right, at this, one of the most famous landmarks in Scotland, the troubled protagonist, Harry, and his best friend, Ron, dodged the rapidly approaching Hogwarts Express in a flying car. When visiting, you may be lucky enough to spot the glorious Hogwarts Express as it travels across the south-west Highlands over the Glenfinnan Viaduct. Train journeys over the famed Viaduct are often considered the best in the world owing to the spectacular views and cosy atmosphere. Read on to the end of this blog for tips about visiting the most famous landmarks in Scotland, including the famous Harry Potter Bridge.

Loch Ness: One of the Most Famous Landmarks in Scotland 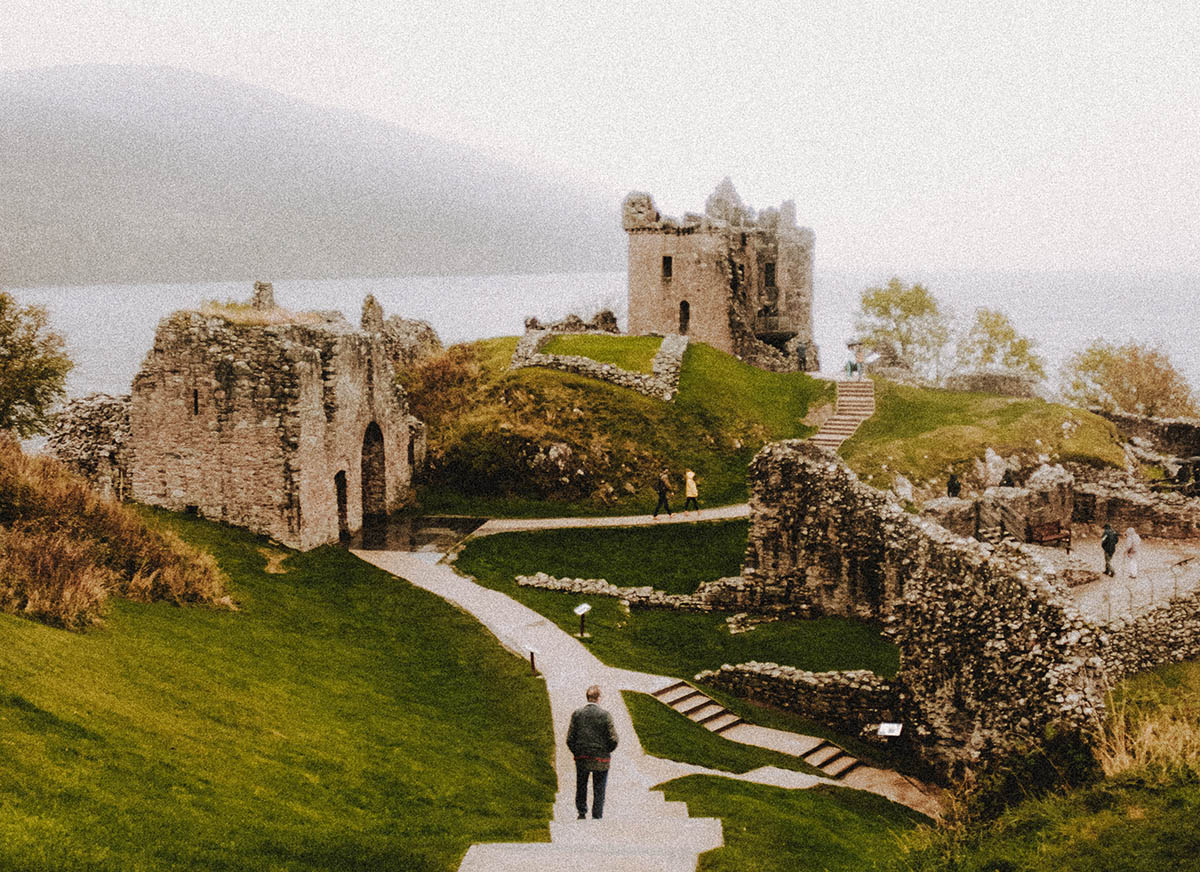 It’s impossible not to include Loch Ness – particularly views of Loch Ness from Urquhart Castle – as one of the most famous landmarks in Scotland. The Loch, which Happy Tours recently dedicated an entire blog towards, was made famous by the legend of the Loch Ness Monster. The intriguing mystery, paired with serene beauty, makes Loch Ness a must-see attraction for holiday makers in Scotland. Just a short distance from the Highland capital of Inverness, Loch Ness is also highly accessible despite its rural location. Find out more about travel to Loch Ness in another of our dedicated Happy Tours blogs.

What is the Most Famous Golf Course in Scotland? 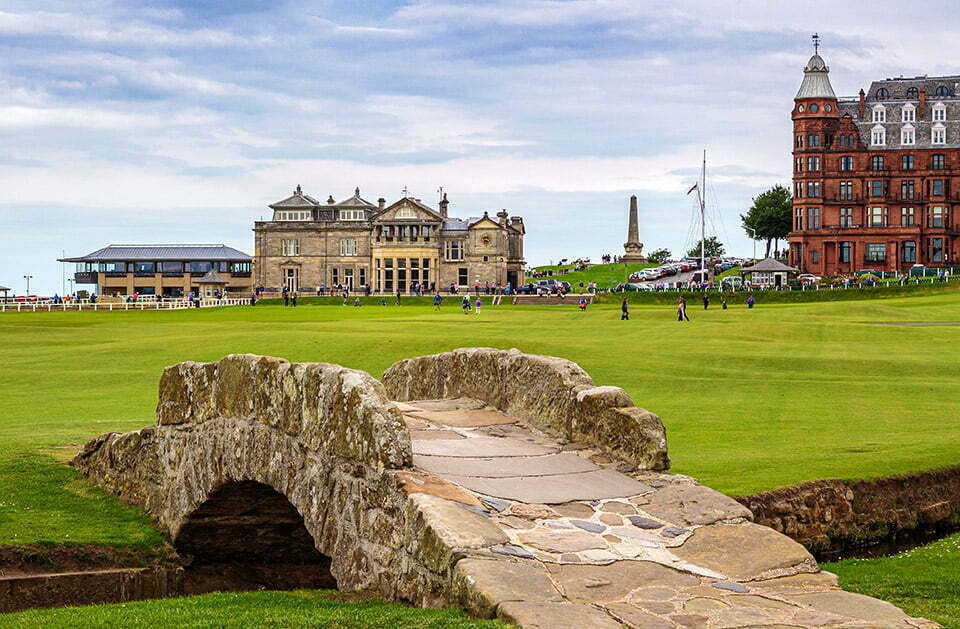 Not only is this next one famous, but it just got even more famous! The Old Course at St Andrews, known as the Home of Golf, is well recognised as the oldest golf course in the world. And you may have spotted it in the news lately as the 150th Open – golf’s original major championship – took place on the prestigious links course this month. With such a renowned golf course at its heart, St Andrews is always bustling with tourists from around the world. But it’s not just the golf which brings crowds to this small town in the East Neuk of Fife. The town also boasts Scotland’s oldest University and was the meeting place of royals, William and Kate. This magic combination of cultural events and institutions firmly cements St Andrews and the Old Course as one of the most famous landmarks in Scotland. St Andrews can be reached easily by train, just remember to get off at Leuchars station where a short bus will take you into the famous town.

What is the Most Famous Castle in Scotland? 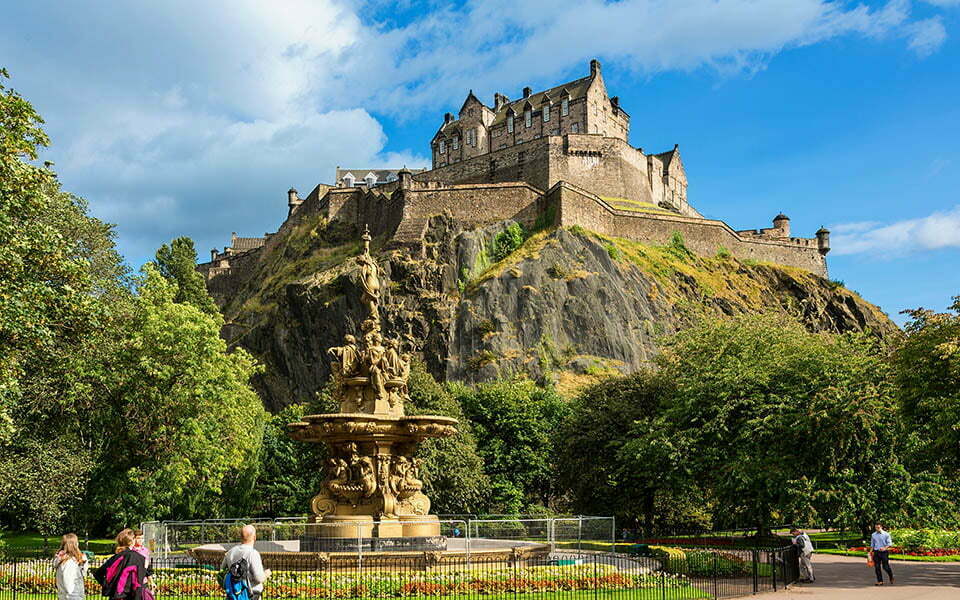 The most famous castle in Scotland is indisputably Edinburgh Castle. Perched atop Castle Rock and visible from large parts of Edinburgh’s city centre, this landmark is not hard to find and is easily one of the most recognisable of Scotland’s landmarks. If you’re heading North through the UK to explore the Highlands, you’re likely to pass through Edinburgh on your route. While there, you’ll find it difficult to miss the castle as it dominates the Edinburgh skyline. 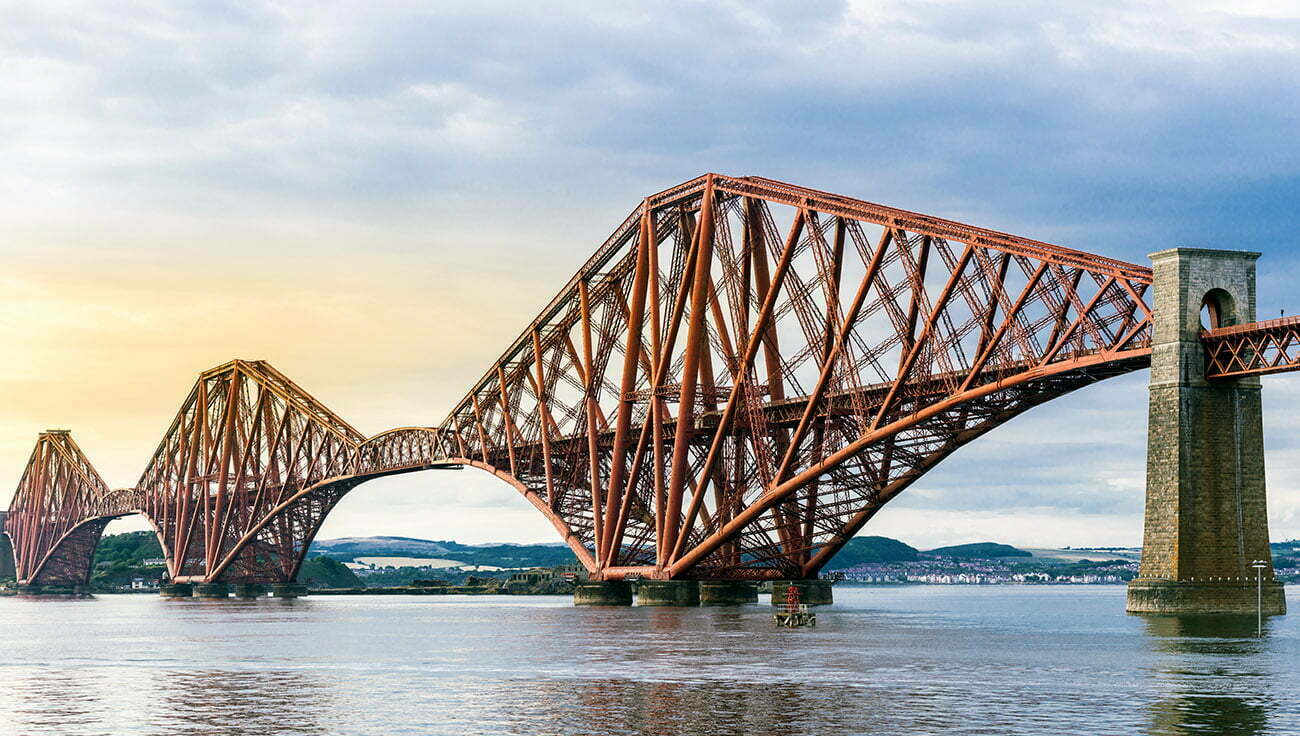 Speaking of travelling North from Edinburgh, en route to the Scottish Highlands you may be fortunate enough to cross one of the Forth bridges; the most famous of which is the Forth Rail Bridge. This feat of late-nineteenth-century engineering is an iconic sight on the route North from Edinburgh. The deep orange colour of this cantilever bridge creates a striking contrast against the surrounding blue water and sky. You can pass over the rail bridge if travelling to Inverness by train, alternatively see this famous landmark from your car as you drive over the Queensferry Crossing. 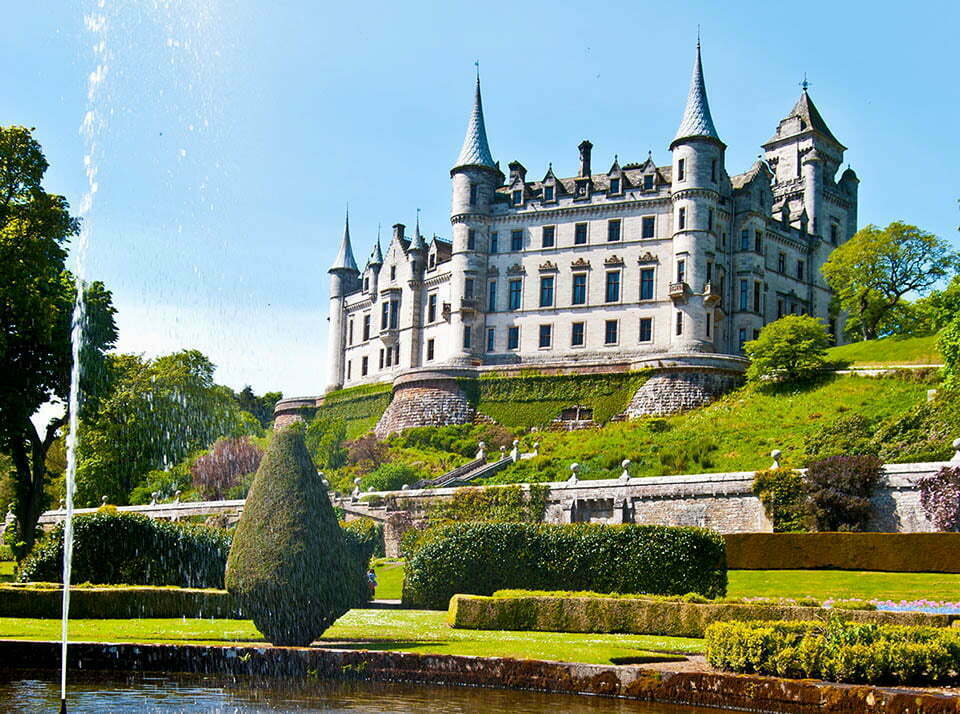 The Kelpies: The Most Famous Sculptures in Scotland 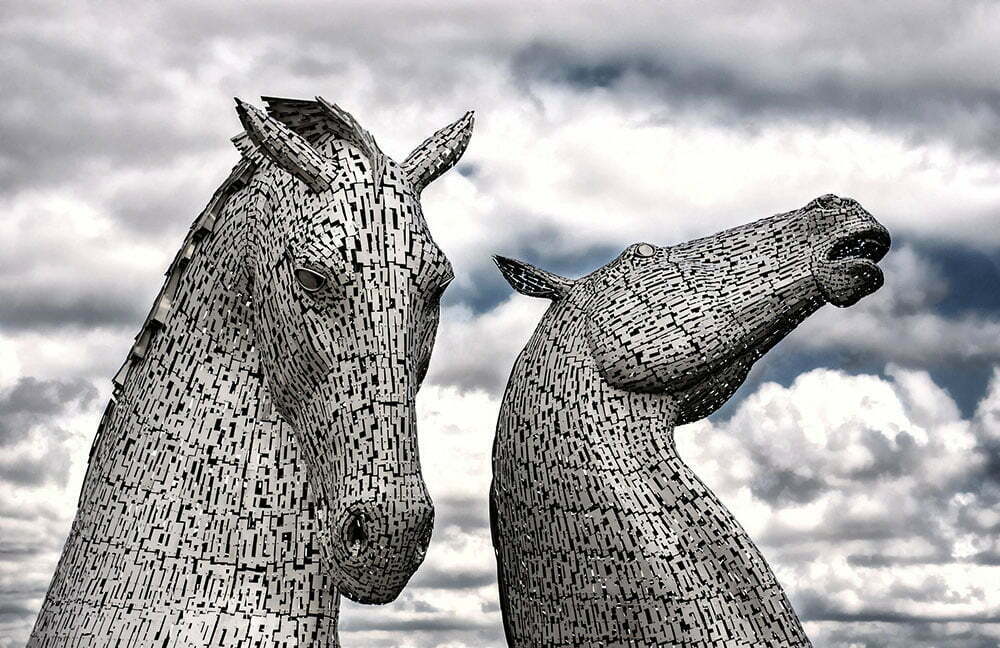 The most famous sculptures in Scotland have got to be the Kelpies. This towering pair of horse heads created by artist, Andy Scott, can be found at the Helix Park in Falkirk. This town between Glasgow and Edinburgh can be accessed via select trains from London Kings Cross station which pass through Edinburgh before heading north to Inverness. So, if you’re planning a trip which encompasses all 10 of the most famous landmarks in Scotland but don’t have access to a car, we highly recommend getting a train to Inverness via Falkirk after exploring sights in Edinburgh. 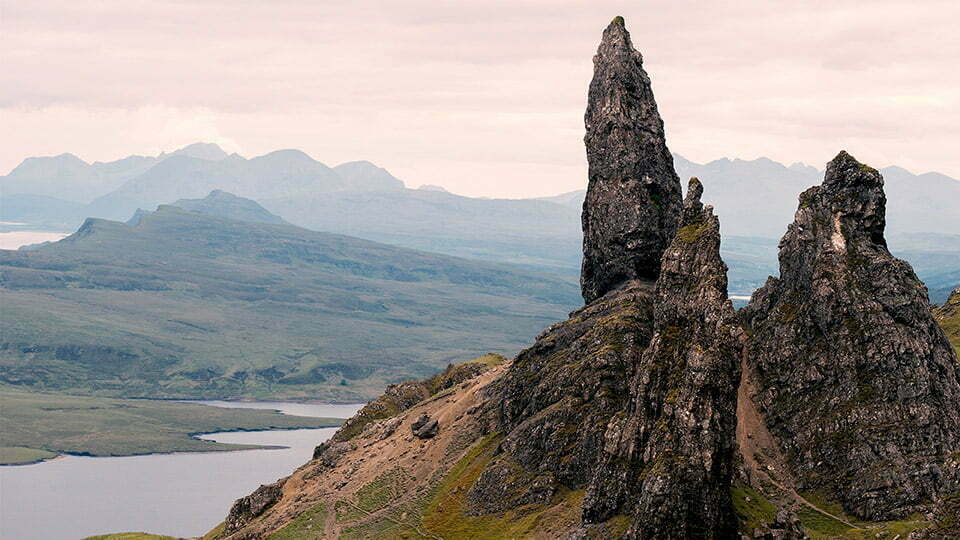 Over on the Isle of Skye, the Old Man of Storr has been accumulating attention and becoming an ever more famous Scottish landmark. The striking spikes of rock which stick up from the hill are popular with photographers and hikers and, for this reason, we included it in our list of the most picturesque locations in Scotland. If you want to read more about the Old Man, we cover its history in our blog about Scottish myths and legends which you can read by clicking here. 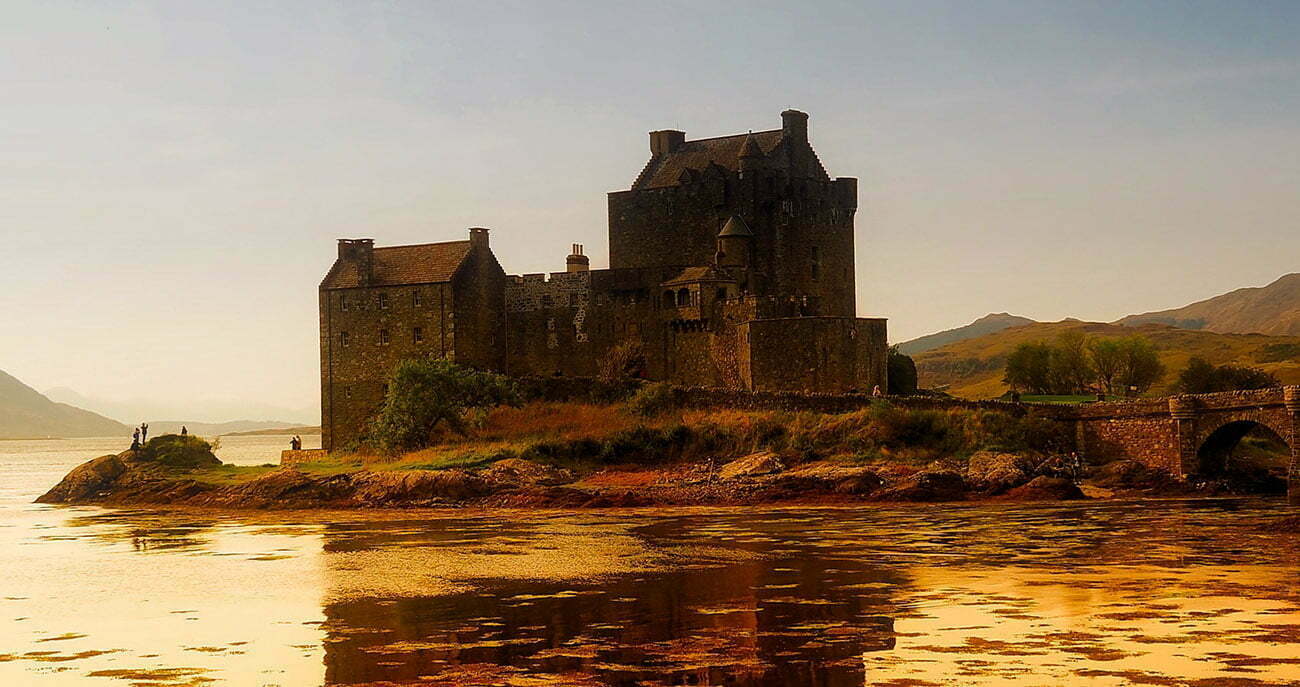 With breath-taking scenery it’s no wonder Eilean Donan Castle has featured in the James Bond and Highlander film franchises. You may recognise the Castle as the Scottish MI6 headquarters in films like ‘The World is Not Enough’ (1999), and as the heart of Glenfinnan village in ‘Highlander’ (1986). These on-screen appearances combined with the castle’s rich history help make it one of the most visited Scottish tourist attractions. It was, therefore, an obvious pick for our top 10 famous landmarks in Scotland. 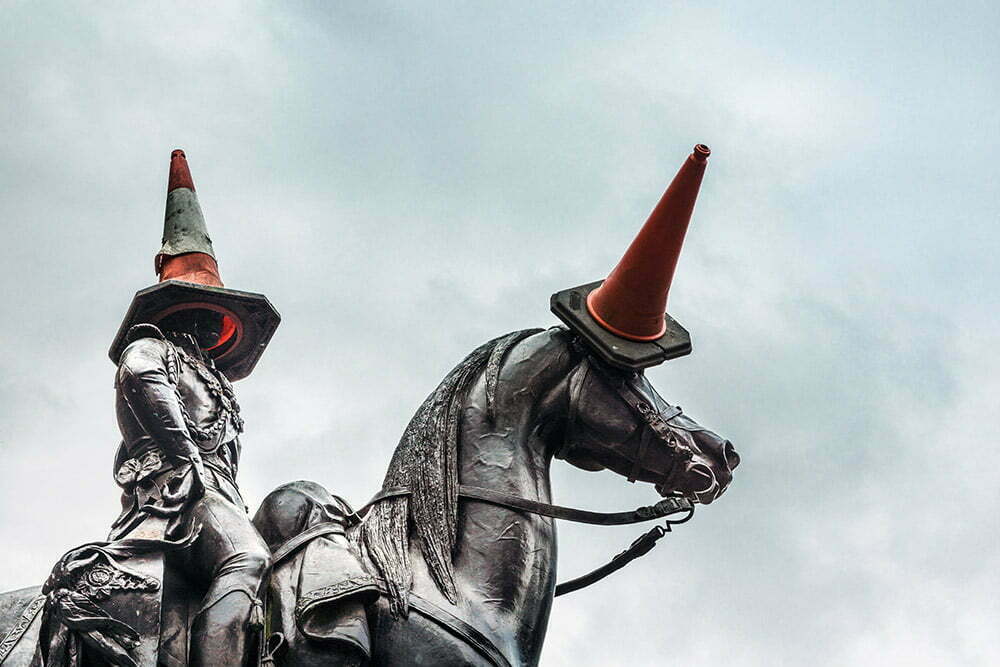 There are impressive statues such as this all over the country but none have acquired a reputation like this one. This comical Scottish landmark situated outside the Gallery of Modern Art in Glasgow is usually found topped with a cone or two. The humorous touch of traffic cones upon one or both heads of the statue, have seen this equestrian figure widely circulated across the internet, gaining increasing fame. While not the largest of landmarks, this statue has become an iconic feature of Glasgow city centre.

Visit the Most Famous Landmarks in Scotland with Happy Tours

Our expert tour guides would be more than happy to show you around some of the most famous landmarks in Scotland from the comfort of our 8-seater tour bus or Land Rover. Spend a full day exploring the most famous Highland landmarks from the city of Inverness or Invergordon Port. Our tours include famous Highland landmarks like the Glenfinnan Viaduct, Dunrobin Castle, Loch Ness, Urquhart Castle, Eilean Donan Castle, and the Old Man of Storr. You can even customise a tour with us to experience the Highlands your own way. Book a tour easily online or get in touch to arrange a private experience.