Learn more about the most wonderful castles near Inverness

Top 10 Castles in the Inverness Area

Whether you’re planning a getaway to the north of Scotland or are just looking for the perfect excuse for an adventure, our list of castles near Inverness is sure to give you the inspiration you need to get out and experience some of the greatest historical sights and experiences the Highlands have to offer. And if you’re really keen, why not check out one of our fantastic private tours, where you can check out the beautiful castles near Inverness in the company of our friendly, local guides.

Starting small we first look north to the Black Isle and Kilcoy Castle, situated just outside of Muir of Ord. Being on the nearby Black Isle makes this castle of Inverness a short drive. Kilcoy Castle is an excellent example of a Z-plan tower house, dating back to 1580. Kilcoy Castle was built initially by the Stewart family but later completed by a son of the Mackenzies around 1618. At some point in the 18th or 19th century, its roof was removed in order to avoid taxes; this caused Kilcoy Castle to become a ruin. It wasn’t until 1891 that two Inverness architects restored the castle to its former glory, adding the four-storey north wing in the process. 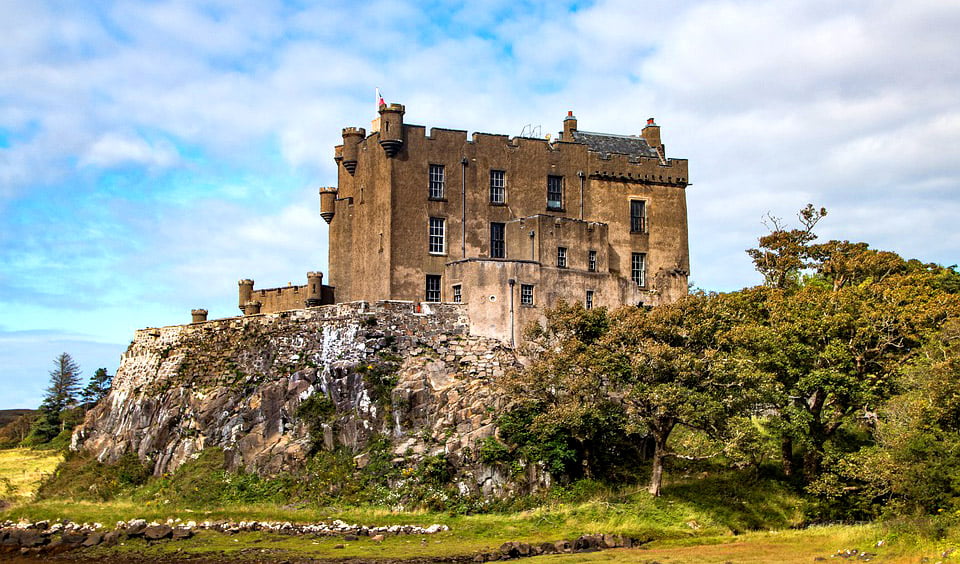 Loch an Eilein Castle is a truly mysterious and picturesque ruin, located around 35 miles south of Inverness near the town of Rothiemurchus. With access only by canoe or kayak, Loch an Eilein Castle entices thousands of visitors every year – but few ever get to step foot on the island it’s perched on. Being a castle in Inverness’ surroundings, its ideal as part of a day trip around several castles near Inverness. 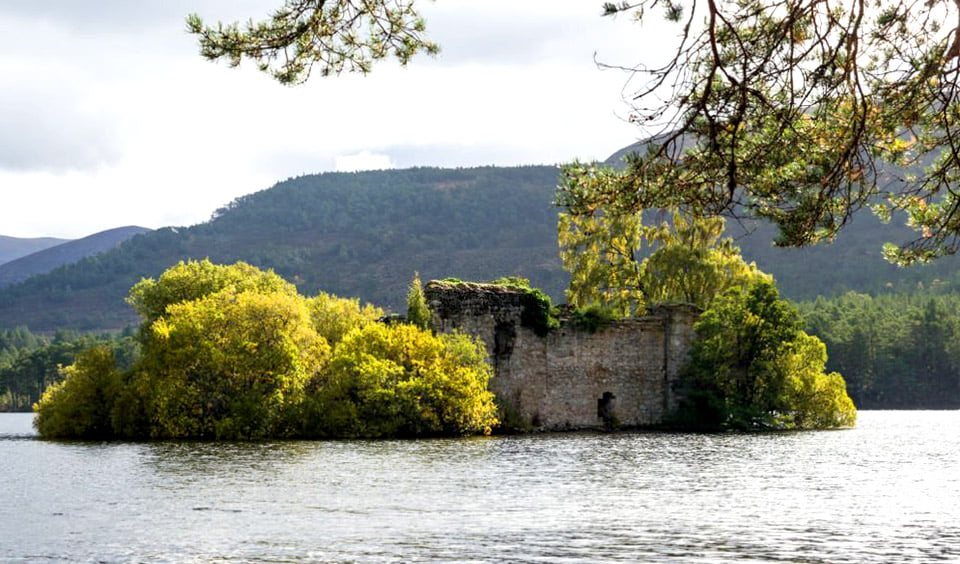 Loch an Eilein Castle is thought to date back to the 14th century when it was used as a refuge from thieves, robbers and cut-throats – indeed one of the loch’s shores is known locally as ‘Robber’s Way,’ an echo of the time of cattle rustlers and raiders who used to plague this area. The loch is surrounded by beautiful woodland walks and picnic spots – why not discover it on your next Highland adventure?

If you’re searching for castles around Inverness during your visit to Scotland, few are as near as Fort George. Only 12 miles from the city centre, this Inverness castle is easily reached by car and select buses via Ardersier. There’s plenty to do at Fort George, including the barrack rooms where soldiers hold recreations of life at the fort in the 18th century and the expansive Highlanders Museum which houses an impressive collection of military artefacts. 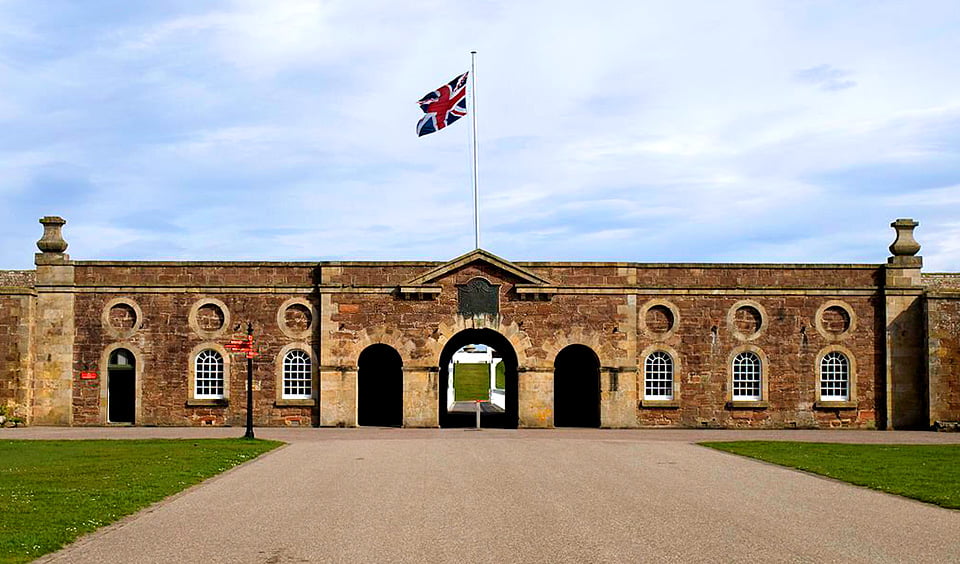 While Fort George isn’t technically a castle, it is one of the most impressive fortified structures in the Highlands and one of the most historic working garrisons to be found anywhere in Scotland. Fort George was built in 1769 in the aftermath of the Jacobite rising, to replace another fort (also called Fort George) in Inverness that was seized and then blown up by the Jacobites.

Outlander fans will love Castle Leod, the official seat of Clan Mackenzie and the real-life “Castle Leoch” as seen in the TV show. Located just north of Inverness outside the town of Strathpeffer, Castle Leod is in easy driving distance of the city and offers visitors a chance to see an excellent example of an authentic 17th-century L-plan tower house.

Castle Leod hosts a number of open days and private tours where guests can view the inside of the house, which is still the official residence of the present-day Mackenzie Clan Chief, as well as the gardens which are home to a number of exotic trees planted by the Mackenzies over the generations.

Perhaps one of the most famous castles in Scotland despite it’s ruined appearance, Urquhart Castle paints a stark silhouette on the banks of Loch Ness. Urquhart Castle (around 30 minutes drive from Inverness) has a fascinating history that spans as far as 1000 years into the past when it started life as a Pictish fort. Since then it has been captured, re-captured, rebuilt and eventually destroyed by the British Army during the Jacobite risings – leaving the broken but beautiful ruin we see today. 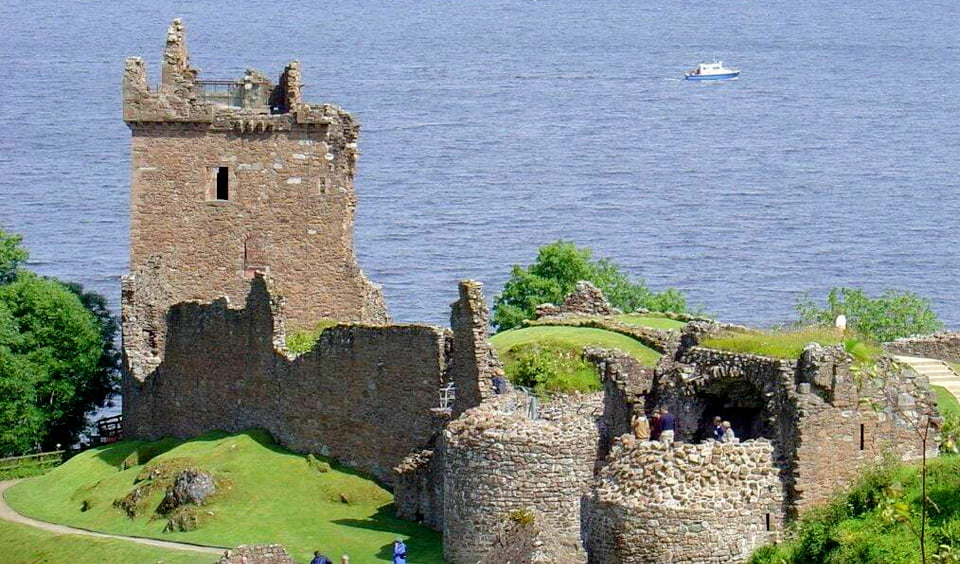 Visitors can climb the iconic Grant Tower and take in the views over Loch Ness, learn more about the castle’s history at the visitor centre, or grab a quick bite at the cafe. Want to get up close and personal with Urquhart Castle yourself? Did we mention Urquhart Castle is one of our stops on our Loch Ness & Culloden Battlefield Tour? As with many of the castles around Inverness, you can visit Urquhart Castle in roughly 30 minutes from the city centre. This makes it easy to visit multiple castles around Inverness on a personalised private tour with Happy Tours.

Just a few miles west of Inverness outside the town of Beauly lies Beaufort Castle. This is a truly impressive castle and one of the few Baronial-style mansions in the Highlands. Beaufort Castle was once in the hands of the Frasers of Lovat after being inherited by Simon Fraser, 11th Lord Lovat (known as the ‘Old Fox’,) who became deeply involved in the Jacobite cause.

Today Beaufort Castle is a private residence – access to the castle and its estate are restricted, however, events are sometimes held on its grounds – if you are lucky you may be able to catch a glimpse of this spectacular castle for yourself. Talk of new development on the castle grounds has surfaced in recent years. Therefore, it is possible that this castle around Inverness may be a prominent holiday attraction in years to come.

A list of the best castles around Inverness wouldn’t be complete without mentioning Inverness Castle itself! Visitors to Inverness won’t be able to miss the pink-sandstone structure overlooking the River Ness in easy reach of the city centre. The castle as it stands today is a relatively modern construction, having been built in the 19th century by a succession of local architects, however many castles have stood on this site since 1057. 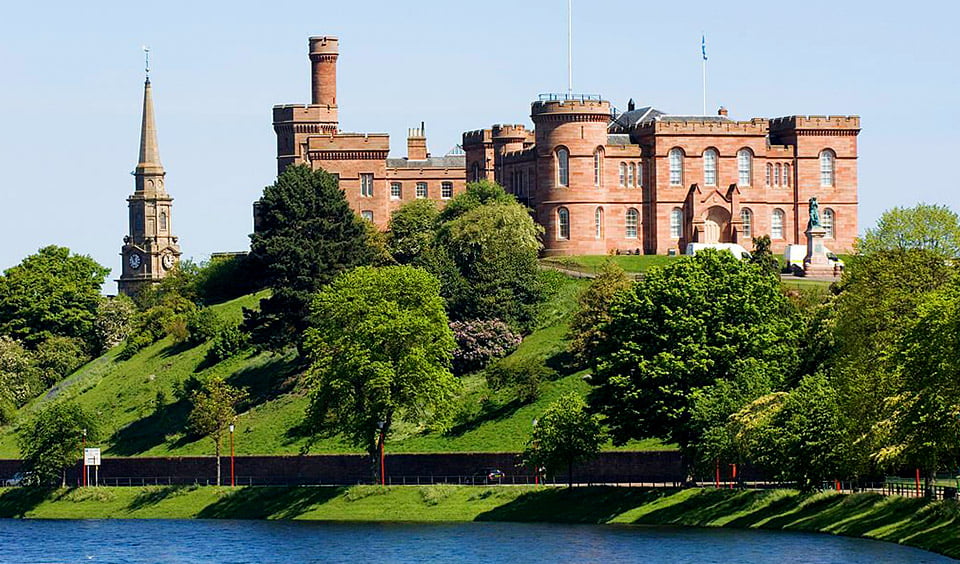 Can you go in Inverness Castle?

Unfortunately Inverness Castle is not fully open to the public. Until recently Inverness Castle was still a working Sherriff Court, so large parts of it were not accessible. However, in 2020 the court was relocated, and the castle is now being renovated to become a full tourist attraction.

What can you do in Inverness Castle?

While the main part of the castle isn’t open, visitors can climb the north tower and take in great views of Inverness. The nearby Inverness Museum and Art Gallery boasts a huge range of exhibits and artefacts that may be of interest to visitors to Inverness Castle – definitely worth checking out during your visit!

Brodie Castle is located east of Inverness along the A96, perfectly situated for visitors travelling from the city towards Scotland’s Whisky Country. With a history dating back to 1567, the castle is now owned by the National Trust for Scotland and is open to the public throughout the year. Brodie Castle boasts expansive gardens – ideally visit in Spring when the grounds are carpeted by over 100 species of daffodil. 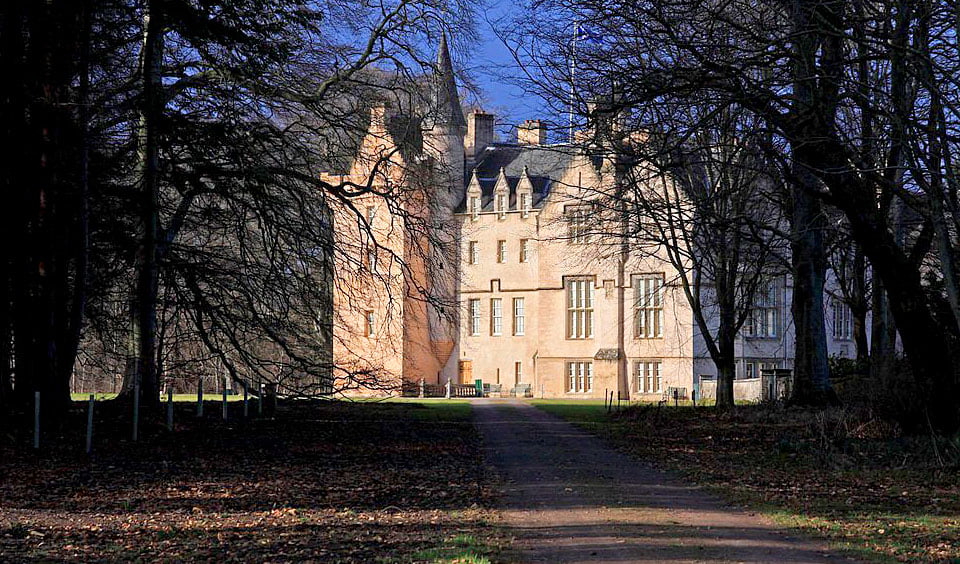 There’s plenty for families to see and do here – kids will enjoy the colourful Playful Garden, home to many quirky characters and sculptures. There’s also a soft play area and a cafe too. Easily visit the castles around Inverness, such as Fort George and Brodie Castle, on bespoke private tours with Happy Tours.

No visit to the Highlands would be complete without seeing the stunning Cawdor Castle and Gardens, located just east of Inverness outside the picturesque village of Cawdor. Cawdor Castle is famous for its connection to the Shakespeare play Macbeth and holds many secrets that visitors will want to discover. Cawdor Castle’s history goes back as far as the 14th century when it was a fortified medieval tower, but soon expanded into the varied structure we see today.

What castle was in Macbeth?

The castle in the play Macbeth is Cawdor Castle. The character Macbeth becomes the Thane of Cawdor when the previous Thane is executed for treason against Duncan, the King of Scotland.

Some sources incorrectly identify Inverness Castle as the one in the play. While they are relatively close to each other, these two historic buildings pretty easy to tell apart! 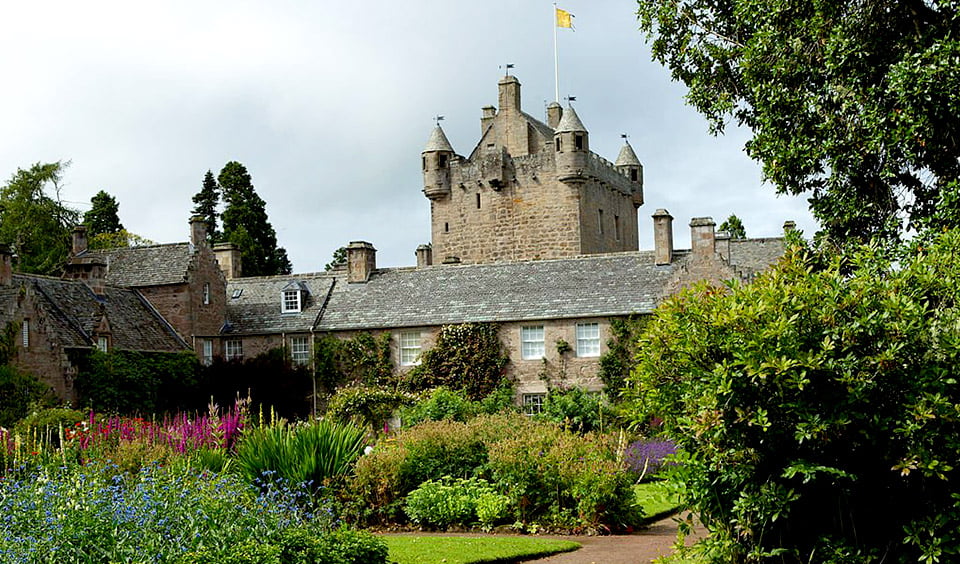 Visitors can enter the castle to see its beautiful historic interior and precious artefacts, as well as wander the famous gardens, where many unique and exotic species of plants have been collected. The Courtyard Café is situated in the old servant’s quarters and offers up a range of tasty snacks and light meals, perfect for rounding off your adventure!

Why not get acquainted with the beautiful Cawdor Castle – and other castles around Inverness – on your next trip to the Highlands? Join us on a private tour and discover this beautiful part of the Highlands for yourself.

Getting around the Highlands to see all of the beautiful castles around Inverness couldn’t be easier with Happy Tours. We’re a local tour company that operates group, bespoke and private tours in the comfort of our 8-seater minibus – the perfect thing to experience all the sights on your list while leaving the driving to your friendly, knowledgeable local guide. Get in touch with our Happy Tours team to arrange one of our fun-filled tours. For more information or to book a tour, give us a call on +44(0)7828 154 683 or email us at tours@happy-tours.biz.