Visiting the Highlands for a day or a permanent resident in this incredible part of the country? From ancient battlegrounds to towering castles in the most remote corners of Scotland, here are 20 places you need to visit in the Highlands.

Most likely recognisable from your friend who has visited the Highlands social media, Eilean Donan Castle is one of the most iconic and unique pieces of history you must see in the Highlands. First inhabited as far back as the 6th century, the castle has fallen and been rebuilt several times over throughout the years. Standing alone in the centre of Loch Duich, between the capital of the Highlands and Skye, it is no wonder this iconic structure is one of the must see places in the Highlands. Visiting the Highlands and want to see this place for yourself? Look no further than our Isle of Skye tour which includes Eilean Donan Castle as one of our stops.

The capital of the Isle of Skye, created as a fishing village in the beginning of the 19th century, Portree is a cultured, history rich village that you must see in the Highlands. Situated in a sheltered bay, directly surrounded by stunning peaks such as Ben Tianavaig and Suidh Fhinn, Portree is the perfect place to visit during your time in the North of Scotland. The name Portree translating to Kings Port in Gaelic, why not travel there like royalty in the luxury of the Happy Tours minibus?

The most famous walk on the Isle of Skye, the Old Man of Storr offers breathtaking views perfect for avid hill walkers and tourists alike. Created by an ancient landslide, located in the Trotternish Ridge. The walk takes around an hour and a half to one of the most photographed landscapes in the world, making it ideal for any age or experience of hill walker.

Perfect for any would be Munro Baggers, the Five Sisters of Kintail is a beautiful mountain landscape, with a footpath featuring 3 Munro peaks along the extensive walk. Even if you’re not looking to take on the 8 hour full day out, it is well worth the trip just to take in the views from the start of the path. Public transport is limited to this location but for those looking to embark on the journey, the Happy Tours minibus stops right beside this trail in our Inverness to the Isle of Skye tour.

By far the oldest attraction on our list of places you must see in the Highlands at 60,000,000 years old, this vast mountainscape contains 16 summits and 11 munros. The tallest of these standing at 3,000 feet, the range itself spanning 11 kilometres. One of the most photographed places in Scotland, it is a perfect example of why the country is famous for its vast peaks and scenery.

A short drive from Inverness, the capital city of the Highlands, Culloden Battlefield is where one of the most famous conflicts in the history of Scotland took place. On the 17th of April, 1746, the Jacobite rebellion under Charles Edward Stewart fell in battle on the murky Culloden moors to the British Forces led by the Duke of Cumberland. The sight today is full of rich history, with monuments standing around the battlefield in memory of the fallen Scottish clans. Along with the field being fully accessible by foot, there is a history and tourist information centre perfect for a family day out.

The world famous Loch Ness is a main route taken by the Happy Tours minibus on our aptly titled Loch Ness Tour. The jaw-dropping Loch contains 263 billion cubic feet of water, yes, you read that correctly. Peat being carried down from the hills by rain means the Loch is pitch black, helping to hide any potential monsters and or ancient dinosaurs that might call the UK’s largest body of fresh water home. Sitting on The Great Fault line which can be seen from space, Loch Ness is one of the places you must see in the Highlands. 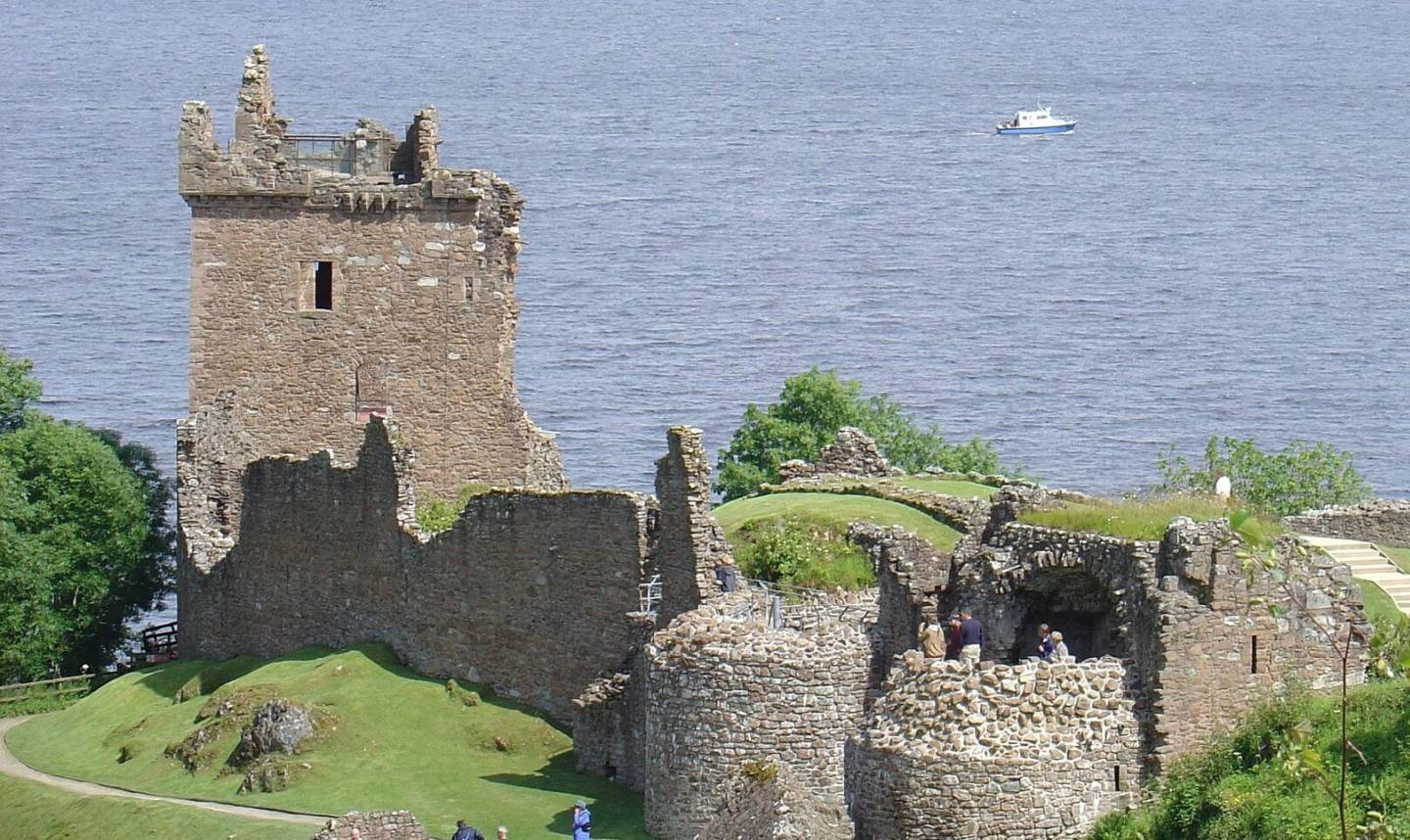 Built on the shores of Loch Ness sometime between the 13th and 16th century, Urquhart Castle is one of the oldest castles in Scotland and the second castle on this list of must see locations in the Highlands. Although the Castle lies mostly in ruins now it offers fantastic, eye-catching views of Loch Ness. As well as this the visitors centre offers huge amounts of information to take with you through the many iconic rooms and areas of the castle’s ruins. The castle over the years hasn’t been shy of action, being sieged many times over, experience the action first hand and book one of our tours today.

Built by the Monks of the Valliscaulian order in 1230, who originally travelled to Scotland from Dijon in France, Beauly Priory features beautiful, ancient, religious architecture. Located by the side of the Beauly river, the church features several funerary monuments as well as many stunning, ancient window panels. The church is only one of three in the whole of Scotland, making it a location you must see in the Highlands.

A sure-fire eye-catcher for fans of the famous Harry Potter series of films, the Glenfinnan Viaduct featured prominently in the titular series. The bridge can be seen in the iconic flying car scene in The Chamber of Secrets. Even if the wizarding world isn’t your thing, this viaduct, built in 1890 is still a must see as it overlooks the glistening waters of Loch Shiel. Want to get in on the magic and see this famous location for yourself? Book onto one of our Great Glen and Glenfinnan Viaduct tours.

A small settlement at the southwest end of Loch Ness, Fort Augustus was named for the no longer standing Fort located there. Although the Fort no longer stands, the towering Benedictine Abbey is still centre stage in the village along with other unique housing structures. The village also features the end of the Caledonian canal as well as several pubs and restaurants, perfect for anyone looking to soak up some Highland culture. 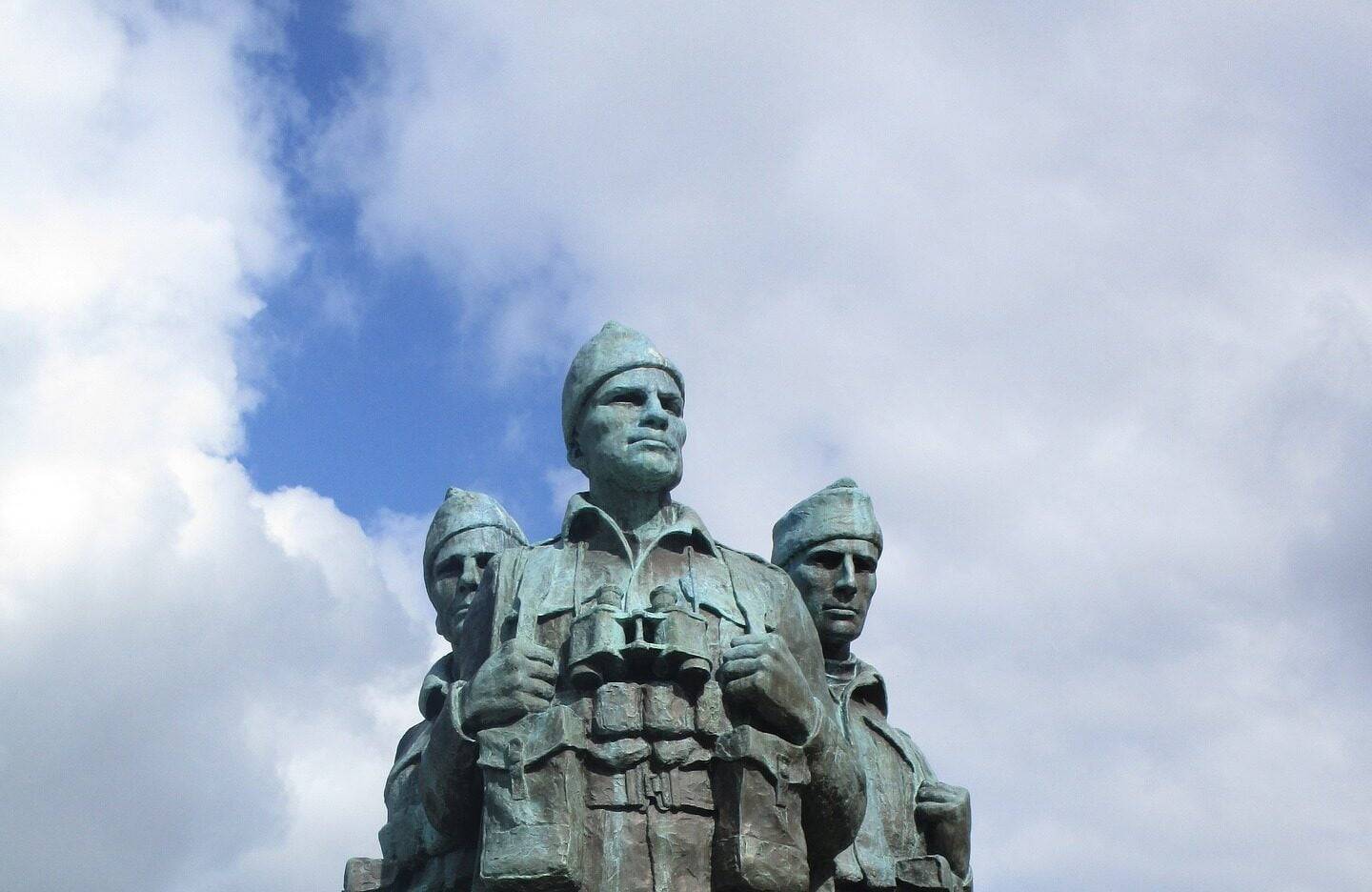 The Commando Memorial stands at 17ft tall, is made of Bronze and is dedicated to the brave British soldiers who gave their lives in the second world war. It depicts three world war two soldiers dressed in standard gear for the time of the war, detailed right down to the weapon pouches and bullet holders. The statue is located near Spean Bridge with the soldiers facing North towards Ben Nevis. 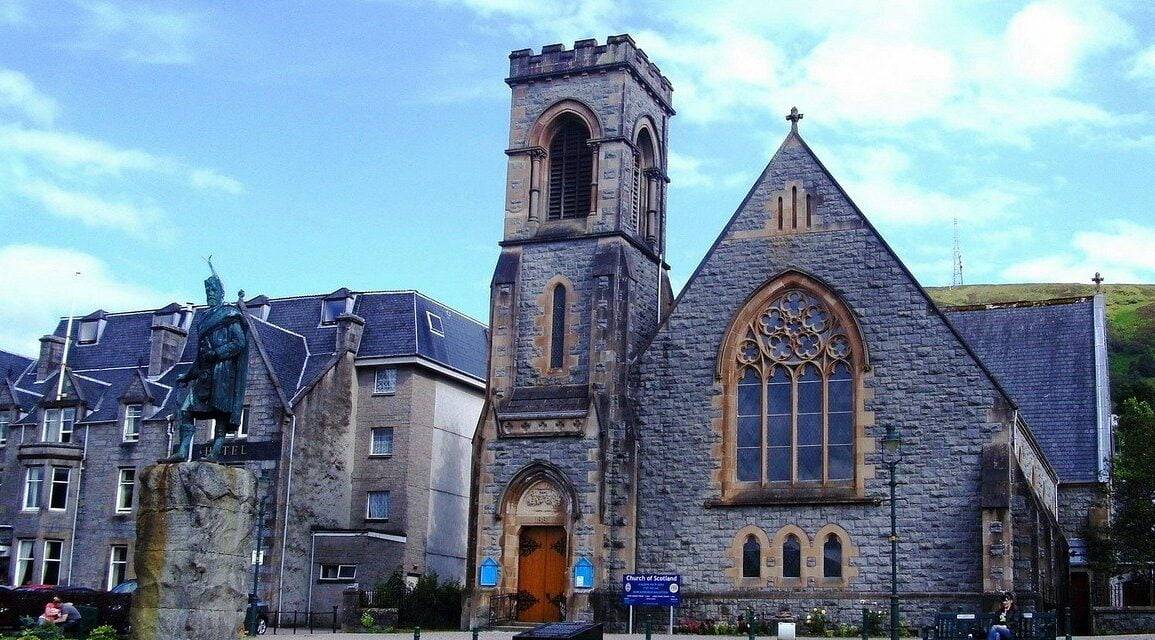 Known as the gateway to Ben Nevis, located on the shores of Loch Linnhe, Fort William is known as the outdoor capital of the United Kingdom. Fans of Harry Potter will also be interested in this location you must see in the Highlands as the iconic Jacobite steam train which doubles as the Hogwarts express in the series regularly passes through the railway station in Fort William. Fort William was also the first town in Britain to light up the streets using hydroelectricity.

The tallest mountain in Britain, Ben Nevis stands 4000ft above sea level. The mountain itself was actually formed by an ancient collapsed volcano that experts think would have caused an explosion compared to Krakatoa. The main trail on the mountain is named the pony track and leads to the summit where the remains of an old observatory can be found. 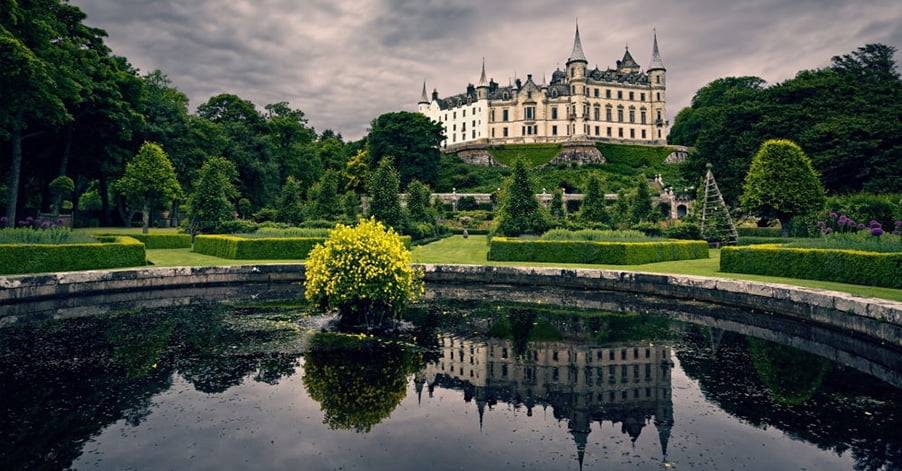 The castle is the most northerly of Scotland’s great houses as well as the largest with 189 rooms. The castle has had many uses, such as a naval hospital in the second world war and a boys boarding school in the 1960s. The castle overlooks and offers stunning views of the Moray Firth.

The second distillery on the list, Glenmorangie is located near Tain on the shores of the Dornoch firth and produces world famous single malt scottish whisky. This distillery also offers full tours year round by experts on the whisky and the distillery itself.

Built by George II in 1719, the barracks was built to hold about 120 men. It is visible from miles around, although originally this was for strategic reasons it adds to the barracks stunning aesthetics. The barracks features a guard room, a brewhouse, a bakehouse and a prison.

This massive national park is home to a quarter of Scotland’s native forest, making it a must see in the Highlands. The largest national park in the United Kingdom is located just outside of Inverness and is perfect for nature lovers all year round. The park was established in 2003 and has even been used for filming in the TV show Outlander for various scenes and the opening credit shots. 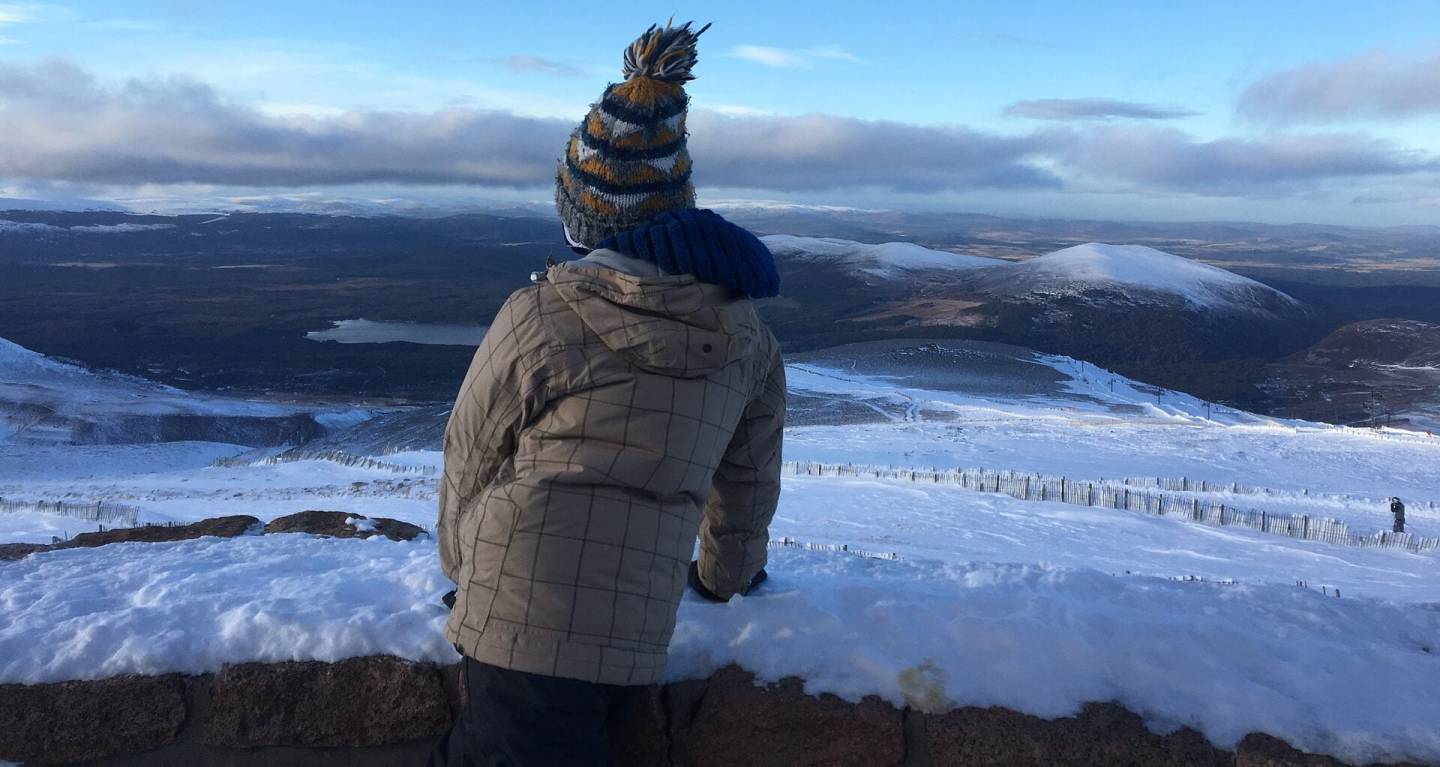 Aviemore is a town located inside of the Cairngorms national park and is known for its affiliation with the skiing season in the Cairngorm mountain range. Aviemore is surrounded by no shortage of lochs, forest walks and activities such as water sports. Interested in exploring this thriving town and surrounding areas? Then look no further than our own Happy Tour around the Cairngorms National Park.